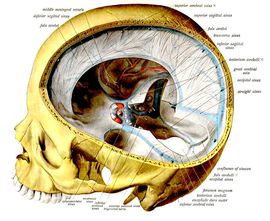 When edema has nowhere to go, it increases pressure inside the skull. Increased pressure limits blood and lymphatic flows leading to dyscfunctions in the brain and decreased CSF flow.
Concussions are in the news a lot lately.
Most of the concussion press has been with the NFL concussion lawsuit that is costing about $1 billion.  The athletes who have applied to receive financial and medical help from the settlement have experienced multiple head traumas.  Some traumas going back to when they started playing football in Pop Warner (as young as 5 years old).  Many of the head injuries are minor and go unreported... throughout their entire career.

Since the discovery of the Lymphatic System in the brain in June 2017, protocols have been established to assist the pumping of inter-cranial edema caused by head traumas.  This recent discovery has also led to a whole new possible cause of all auto-immune disorders.  Manual therapy protocols have been long since established as effective treatments with only anecdotal effects and case notes.  Scientists and researchers are little more than stumbling upon new anatomy and physiology that is explaining and validating why these treatment approaches are effective.  The sufferers of concussions are finally able to recover, no matter how long ago the trauma occurred.  Most don't realize they are living with the after effects of a head trauma until after treatment.  Most report it like gaining peripheral vision, unlocking the key to mental focus, and eliminating 'brain fog'.  A clinic in Gainesville (Opening in May of 2017) is a center where retired NFL athletes will receive these therapies as part of the settlement.  These same therapies are available to you in Central Florida at Rx Massage Therapy.

Before considering a full treatment protocol, an assessment needs to be done.  The assessment can be done in less than 30 minutes.  If you assess as having inter-cranial edema, the first step will be to schedule a 90-minute session which will consist of the Cranial/Structural Core Distortion Release and the Frontal/Occipital Decompression.  Once those two therapies have been done, you will be well on your way to a healthier life.  For full recovery, you will need to return for one session a week for the next three to five weeks, depending on the severity and number of head trauma(s).

Schedule your assessment by clicking the button below.
Schedule Concussion Evaluation
Brief Overview of the Frontal/Occipital Decompression